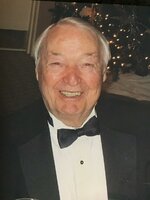 Carl Oliver Gulledge passed away peacefully at his home surrounded by his family on September 29, 2021. Born to Lucy Coulter and Edmund Thomas Gulledge on February 4, 1935 at the family home, Gulcou Farms in Wedgefield, SC, he was the youngest of their six children. From an early age, he was lovingly known as “Buddy,” based on a nickname given to him by his father, and only those who didn’t know him well called him Carl. Buddy attended the University of South Carolina where he was a member of Sigma Alpha Epsilon fraternity. During the summers of his college years, Buddy managed the Elks Club swimming pool where he taught many of Sumter’s children how to swim. After earning his degree from USC, Buddy joined the US Marine Corps and was graduated from Officers’ Candidate School. In July of 1958, Buddy married Barbara Hughes whom he had known since their days as children taking piano lessons from the same teacher. The newlyweds were stationed in Quantico, VA and Buddy felt serving as a Marine was one of his life’s highest honors. In 1963, Buddy went to work for his father as the overseer of the family’s 2,000 acre farm in Wedgefield. For over 20 years, Buddy carried on the family farming business where he was a regular at Batten’s Store and hosted many a dove shoot. He was also instrumental in establishing the Wedgefield Stateburg Water District. He spent the last 25 years working for Berkshire Hathaway - John Brabham Real Estate where he was loved by his co-workers and clients for his zest for life and drive to close deals. Buddy was a faithful member of Trinity United Methodist Church and the Boyle Bible Class. He was also a member of the Kiwanis Club and served on the board of C&S National Bank. He was a member of the Thalian Club, Sumter Assembly, and charter member of Les Trente Club. Buddy was also a member of Sunset Country Club where he was an avid golfer and card player. He made lasting friendships on the golf course and around the card table. He thoroughly enjoyed attending the Mt. Vernon Coffee Club, and Mondays at the Diner. The other attendees were all great friends and were entertained with many of Buddy’s stories. Telling a story may have been one of Bud’s most endearing attributes. His stories became more colorful each time he told them and always left his listeners with a smile. In addition to his wife of 63 years, Barbara, he is survived by his children Carl Gulledge, Jr (Kim) of Columbia, Caren Schwartz (Milton) of Sumter, and Allison Easterby of Greenville. His grandchildren - Hughes Schwartz (Jessica), Reid Schwartz (Katherine), Grier Schwartz (Catherine Kelley – fiancé), Eliza Easterby, Adams Easterby and Coulter Gulledge, were the pride and joy of his life, as were his newest family members, two great-grands (Preston Schwartz and Ellis Schwartz). He is also survived by many nieces and nephews whom he loved. Buddy was predeceased by his siblings Ed Gulledge, Jr, C.J. Gulledge, Gordon Gulledge, Lucius Gulledge and Floride Carter. Funeral services will be held on Friday, October 1st at Trinity United Methodist Church at 11 AM and burial will immediately follow at Evergreen Cemetery. Pallbearers will be grandsons, Hughes Schwartz, Reid Schwartz, Grier Schwartz, Adams Easterby and nephews, Jimmy Gulledge, Richard Gulledge, Mike Gulledge, Pebble Gulledge and Rex Carter, Jr. Memorials may be made to Trinity United Methodist Church, 226 W. Liberty Street, Sumter, SC 29150 or to Sumter United Ministries, P. O. Box 1017, Sumter, SC 29151. On-line condolences may be made at www.sumterfunerals.com Elmore Hill McCreight Funeral Home & Crematory, 221 Broad Street, Sumter, is in charge of the arrangements (803) 775-9386.