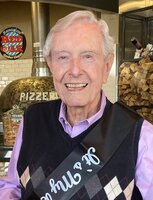 Richard Seymour Metz, 90, widower of Rose Ferrara Metz, died June 4, 2022 in Pineville, NC. Born in Cleveland, Ohio, he was the son of the late Carl H. Metz Jr. and Florence Cook Metz. He graduated from Case-Western Reserve University in 1954 with a bachelor’s degree in Business Administration. Mr. Metz was a devoted member of St. Anne Catholic Church, Sumter, SC; St. Matthew Catholic Church, Charlotte, NC and of the Sunset Country Club in Sumter. He was retired from the U.S. Air Force with 25 years of dedicated service at the rank of Lt. Colonel. During the Vietnam war, Col. Metz flew 200 combat missions in B-52 & RF-4 aircraft and was awarded the Distinguished Flying Cross plus several Air Medals. He was a stock broker with J.C. Bradford and other brokerage firms in Sumter. He was past President of the Sumter Kiwanis Club & their mirth-meister, President of the St. Anne Parish Council, a mentor at Kingsbury Elementary School and other schools in the area plus he performed in several plays at the Sumter Little Theatre. He was a tax-preparer for H & R Block for ten years. An avid golfer, he was a member of the Godfathers Golf Group & the St. Anne Christian Golf Group. He was also an amateur organist. Mr. Metz spent his final years living in the Manor-Dorchester Senior Independent Living Facility in Pineville, NC. Mr. Metz loved his children dearly. Survivors include his son, Jeffrey (Lisa) of Charlotte, NC and his daughter, Julie Langley (Steve) of Huntersville, NC and six grandchildren, Richard E. Metz, Jennifer Walker, Spencer and Trevor Metz, Sarah and Emily Langley plus three great-grandchildren. He was pre-deceased by his son, Christopher Metz of Cape Coral, Florida and his brother, Donald E. Metz of Cincinnati, Ohio. Funeral Services will be held on Sunday, June 26 at 11:00 A.M. with full military honors in the chapel of the Elmore Hill McCreight Funeral Home, 221 Broad Street in Sumter, SC. Burial will be private, in Evergreen Memorial Park Cemetery. Memorials in his honor may be made to the Salvation Army, P. O. Box 2229, Sumter, SC 29151. Online condolences may be made at www.sumterfunerals.com Elmore Hill McCreight Funeral Home & Crematory, 221 Broad Street, Sumter, is in charge of the arrangements (803) 775-9386.