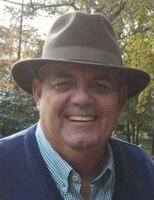 Charles T. “Chuck” Osborne, 75, husband of 52 years to Alice Garrett Osborne, went home to be with his Lord and Savior, Saturday, September 10, 2022. Born in Sumter County, he was the son of the late Thomas J. Osborne and Mary Ellen Osborne. Mr. Osborne attended Furman High School, Sumter Technical College and USC Sumter. He served in the United States Navy and was a Vietnam veteran. While serving our country, Mr. Osborne received numerous letters and medals of commendations including the Navy/Marine Corps Medal of Achievement. His best memories are that of his time spent with his best friend of 55 years, Rick Decker of Amarillo, TX. He worked for the trucking industry for over 30 years in administrative support. Mr. Osborne spent many years playing golf with friends in and around Sumter. Golf was his favorite past time and hard to give up. He often reminisced about his time on the course. He was a member of Harmony Church for over 40 years. Mr. Osborne is survived by his wife, along with a son, Brandon Garrett (Candis) and his grandchildren, Caleb Austin, Anna Grace, and Kristopher “Cash” Lee of Sumter; his daughter, Sara Elizabeth Trepoy (Frankie), also of Sumter. He is survived also by his brothers, Rev. William J. Osborne (Lynne) of Sumter and Mark Allen Osborne (Kesta) of Monkton, VT, along with his aunts, uncles, nieces, and nephew. A Celebration of Life Service will be held at 3 P.M. Saturday at Harmony Church in the Family Life Center with Rev. Drew Choate officiating. The family will receive friends following the service. Memorials may be made to the Sumter Lion’s Club, P. O. Box 2513, Sumter, SC 29151. Online condolences may be made at www.sumterfunerals.com Elmore Hill McCreight Funeral Home & Crematory, 221 Broad Street, Sumter, is in charge of the arrangements (803) 775-9386.