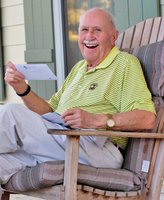 Joseph S. Dabbs, 87, of Fernandina Beach, FL, passed away peacefully on Wednesday, April 8, 2020 at his residence. Joe was born in Mayesville, SC to the late Eugene W. Dabbs and Stella Glascock Dabbs. After graduating from Mayesville High School in 1950, Joe continued his education at Clemson University and then Presbyterian College where he graduated in 1955. Following graduation Joe entered the Navy as an Ensign and completed his basic officer course and flight school in Pensacola, FL. He became a Grumman S2F anti-submarine warfare aircraft pilot and qualified for aircraft carrier takeoffs and landings. Later in his Navy career, he also flew Lockheed P2V anti-submarine warfare aircraft. He served his country with 5 years on active duty plus 15 more years in the Navy Reserve and reached the rank of Commander. Following his discharge from active duty, Joe worked briefly as a sales manager for Jack’s Cookies Company in the Southeast. When an aviation opportunity presented itself in the early 1960s, Joe took it and became a pilot with Eastern Airlines. He flew routes all over the continental US and Caribbean islands in several different aircraft including the Lockheed Constellation and Electra, Douglas DC-9, Boeing 727 and Lockheed L-1011. Joe retired from Eastern Airlines as a Captain in 1984. During his Navy active duty service, Joe had met Gail Finley, his future wife, in Boston, MA. Joe and Gail had 5 children together and lived in several East Coast cities, finally settling in Atlanta, GA while based there with Eastern Airlines. Following a divorce, Joe relocated from Atlanta to Fernandina Beach in the early 1970s. In the last several years, Joe became famous in his neighborhood as the nice man who gave treats to every dog that stopped at his front porch during happy hour each night at 5 p.m. Most dogs who stopped by once instinctively returned the next night and every night thereafter. Seeing the dogs and talking to their owners gave Joe great joy and he reveled in their visits. He also loved golf and he even tried pickleball at age 86. Joe loved life and lived it to the fullest. The people that Joe met during his lifetime, his adventures growing up in rural South Carolina during harsh economic times, and his flying experiences became the source of a never-ending stream of stories that he would share with anyone who happened to be conversing with him. He was always upbeat, funny and entertaining, and he had an unforgettable, infectious laugh. At the same time, he was a great listener and had a way of making everyone around him feel comfortable to be there. In addition to his immediate and extended families, Joe was tightly connected throughout his life to his high school and college friends, as well his Navy and Eastern Airlines flying buddies, and he regularly attended reunions, annual conventions and informal gatherings. At an Easter Silver Falcons event in 2011, the meeting theme was appropriately titled: “Legends Never Die”. He leaves behind his son Joseph S. Dabbs Jr. (Sue) of Irvine, CA; daughters Teri Lovelace (Tom) of Lake Oswego, OR, Julie Dabbs (Rich) of Santa Rosa, CA, and Kristen Drake (Bob) of Fernandina Beach; a sister, Louise Bevan of Mayesville, SC, 2 grandsons, 3 granddaughters, and many nieces, nephews, and extended family members. He will also be deeply missed by his longtime companion Barbara Wallace of Montgomery, AL. An infant daughter, Ashleigh, preceded him in death. There will be a private burial service at the Salem Black River Presbyterian Church Cemetery in Mayesville, SC. The family is planning on a Celebration of Life service that will be scheduled for a later date. In lieu of flowers, memorial contributions may be made to Salem Black River Presbyterian Church Cemetery Fund, c/o Nancy Wilson, 228 Haynsworth St, Sumter, SC 21950. Please share your memories and condolences at www.oxleyheard.com or www.sumterfunerals.com Elmore Hill McCreight Funeral Home & Crematory, 221 Broad Street, Sumter, is in charge of the arrangements (803) 775-9386