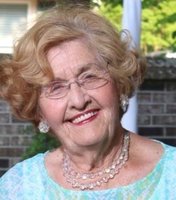 Devoted wife, cherished mother, grandmother and beloved friend, Anna Shuler Bynum, widow of William Edwards Bynum Junior of Sumter, South Carolina and daughter of the late William Aiken and Ada Bradley Shuler of Rembert, passed away peacefully at home in Sumter, South Carolina on Wednesday July 29, 2020. She was 92. Born on April 13, 1928, at the onset of the Great Depression, Anna always recognized that the time of her growing up years was of great importance. During her youth, she learned lasting lessons which guided her life. Throughout her high school years at Hillcrest High School, World War II was being fought and this continued to shape the woman she became. She made Columbia College her home for 4 years and she said many times that those years were so very important. While at Columbia College, she served as President of the YWCA and was also one of the ten outstanding seniors listed in the Who’s Who of American Colleges and Universities. It was her collegiate experience that stretched her to become a beloved teacher. During these years, she set up a lifelong pattern to achieve whatever she set her mind to accomplish, leaving an amazing legacy for her children, grandchildren and great-grandchildren. After graduation from Columbia College, Anna took her first job at Trinity United Methodist Church in Sumter as the Educational Director. It was there that she met her future husband, Billy. Her tenure at Trinity UMC lasted many years as later she had the great joy of working under five different ministers as the Church Visitor. Anna filled much of her time volunteering for multiple organizations including the Junior Welfare League, the YWCA, the American Red Cross Board, Sumter County Public Schools and the Sumter Book Club. While volunteering was an important part of her life, her children, home and garden were central to who she was. She was a master gardener and a wonderful cook. She believed that cooking meals for her family was ordained by God and of utmost importance. Her children and grandchildren remember family meal times fondly and will miss the times spent around her dining room table. Anna is survived by her children, William Edwards III and his wife, Trish of Raleigh, NC, Mary Clarke of Columbia SC and Thomas Budd and his wife, Peggy of Dunwoody GA., nine grandchildren and six great-grandchildren. Her oldest daughter Becky McCutchen and her husband, English McCutchen both preceded her in death. Graveside services will be held at 11 A.M. Saturday at Sumter Cemetery with Rev. Joseph R. James, Jr. and Rev. Dr. Reginald Thackston officiating. The family will receive friends following the graveside service. Memorials may be made to Trinity United Methodist Church, 226 W. Liberty Street, Sumter, SC 29150 or to Crosswell Children’s Home, 11 Crosswell Drive, Sumter, SC 29150. Online condolences may be sent to www.sumterfunerals.com All attendees are asked to wear masks and maintain social distancing during the graveside services. Elmore Hill McCreight Funeral Home & Crematory, 221 Broad Street, Sumter, is in charge of the arrangements (803) 775-9386.