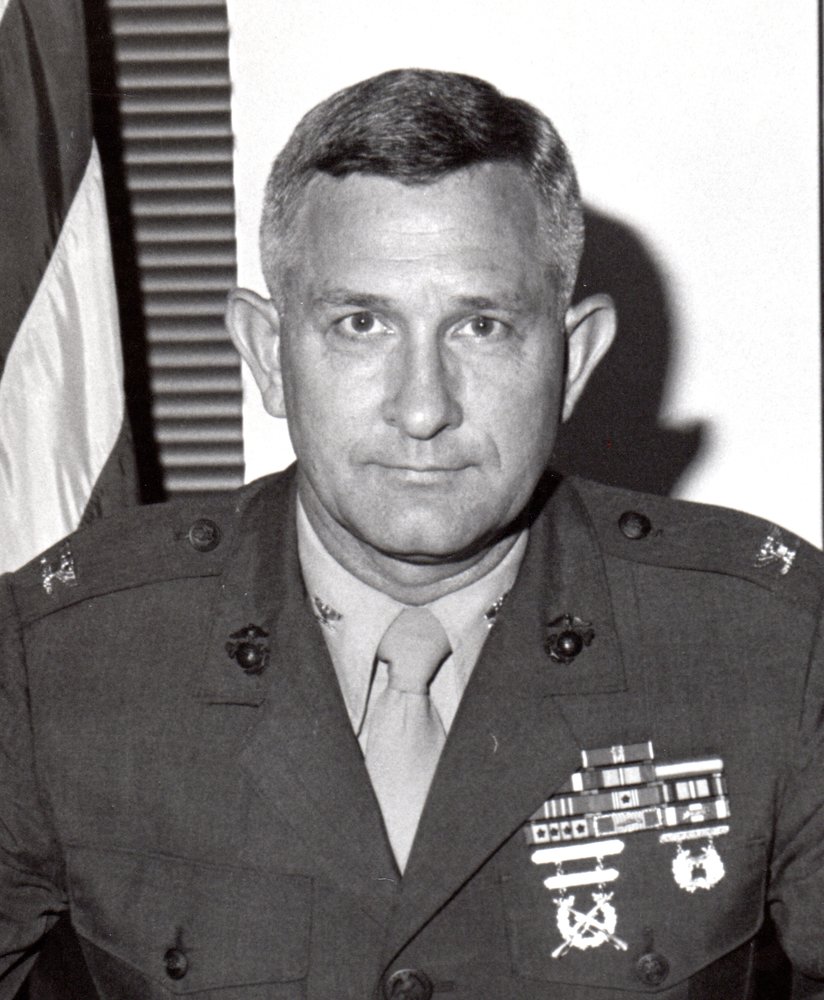 Born in Greensboro, GA., he was the son of the late Hulsey Cleveland Weatherford and Susie Bytha Eberhart Weatherford. A graduate of Berry College, he later received a Masters degree in Education from the University of Virginia.

During the early part of his 30-year military career, Colonel Weatherford served in a variety of Command and Staff billets in the 1st and 3rd Marine Divisions. These tours included duty as a platoon officer and logistics officer. Other early assignments included tours at Marine Corps Recruit Depot (MCRD), Parris Island, S.C. and at the Marine Corps Supply Center, Albany, GA.

In July 1963, he was assigned as the Inspector/Instructor of the 38th Rifle Company, USMCR, in Montgomery, AL. He held that post until August 1966 when he was selected to attend the Air Command and Staff College, where he was graduated as a “Distinguished Graduate”.

After graduation in July 1967, he served for a year in Vietnam where he earned the Bronze Star with Combat V.

In August 1968, he was assigned to the Marine Corps Development and Education Command at Quantico, VA, where he served as Head of the Publications Branch and Editor of the Doctrinal Publications of the Organization, Doctrine, Tactics and Techniques Division.

In July 1980, Colonel Weatherford was assigned as chief of staff of the MCRD, Parris Island, SC, where he served until his retirement in June 1984. Colonel Weatherford’s personal decorations include the Legion of Merit (2nd Award), Bronze Star Medal with Valor, and the Navy Commendation Medal.

He was a member of Bethel United Methodist Church in Oswego where he was Membership Secretary and a member of the choir.

Services will be held Saturday, December 14 at 3 P.M. at Bethel United Methodist Church in Oswego with Rev. Tim Whited and Rev. Mike Henderson officiating.  Burial with full military rites will be in the cemetery adjacent to the church.

Memorials may be made to the Bethel United Methodist Church Building Fund, 5575 Lodebar Rd, Sumter, SC 29153.